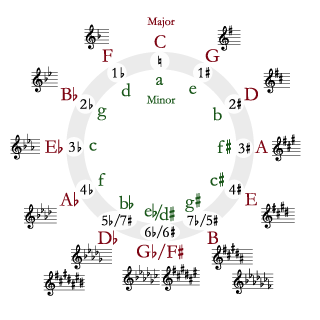 This is a well-known design of a circle of 5ths. 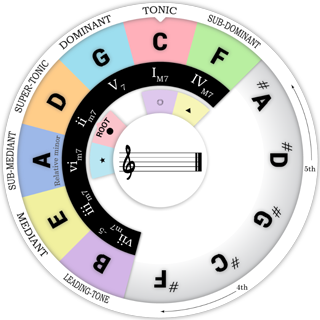 'Chord Wheel' is newly designed to show the correlation between the scale and the chord. Also, it has every information that can be get from a normal circle of 5ths.

Direction of the Wheel

Circle of 5ths is a progression of keys and the keys can be layouted in two directions. 'Chord Wheel' supports both of the 2 directions. So, users can set the circle's direction to a dominant motion in CW or CCW. A default direction of the circle is displaying a dominant motion, a flow of vi-ii-V-I in CW, cause it looks more clear and obvious than the other. 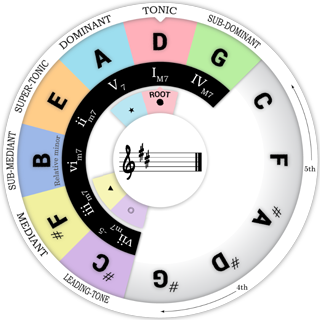 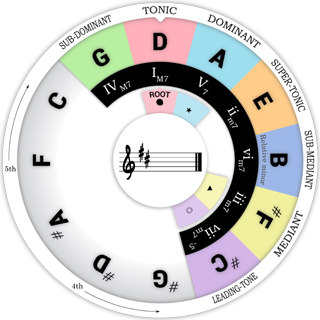 Inner wheel is switchable depending on user's purpose. 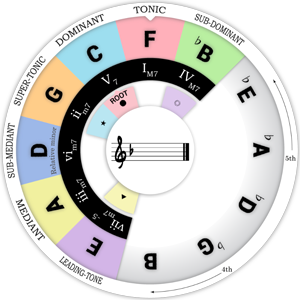 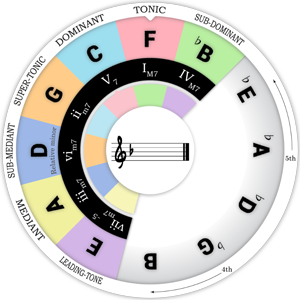 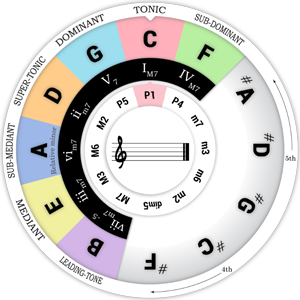 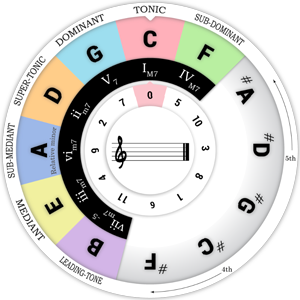 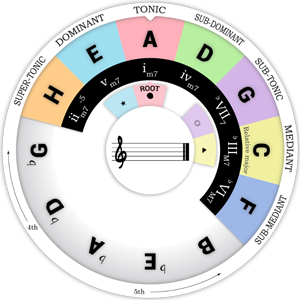 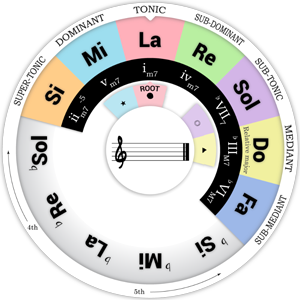 The notes of the 12-tone scale can be written by their letter names A–G, possibly with a trailing sharp or flat symbol, such as A♯ or B♭. This is the most common way of specifying a note in English speech or written text. In Northern and Central Europe (e.g., Germany, Austria, Poland, Czech Republic, Slovakia, Hungary, Slovenia, Denmark, Iceland, Norway, Finland, Estonia, Latvia, and the Netherlands—and with diminishing frequency in Sweden), the letter system used is slightly different for historical reasons. In these countries' languages, the note called simply B in English (i.e., B♮) is called H, and the note B♭ is named B. (The C chromatic scale is thus: C C♯ D D♯ E F F♯ G G♯ A B H C). Also, the endings -is (for sharp) and -es/-s (for flat) are used. The note a semitone above C is either "Cis" or "Des", and A♭ is "As". Often this is also used in writing (instead of using the sharp or flat symbol), especially in flowing text. Another difference is that these languages often write the notes in lower case, e.g., ais, c, d, es, fis. Lower case denotes the minor, upper case denotes the major, so A = Amaj and a = Amin. †

In Movable do, or tonic sol-fa, each syllable corresponds to a scale degree. This is analogous to the Guidonian practice of giving each degree of the hexachord a solfège name, and is mostly used in Germanic countries, Commonwealth Countries, and the United States. †

In Fixed do, each syllable corresponds to the name of a note. This is analogous to the Romance system naming pitches after the solfège syllables, and is used in Romance and Slavic countries, among others, particularly Spanish speaking countries. †

In Chord Wheel, scales are displayed on a outer wheel. All scales covered on western music theory are included. Following scale types are available.

Please understand that Chord Wheel is an app on the western music theory (classical / jazz), not a scale / chord dictionary.

In Chord Wheel, chords are displayed on a inner wheel. Every chords related to the scales above are included. Following chord types are available.

In Chord Wheel, modes are displayed on a inner wheel. Every modes related to the scales above are included. Following mode types are available.